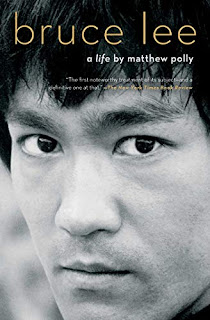 Bruce Lee passed away on July 20, 1973.  Today seemed like a good day to talk about Bruce Lee: A Life by Matthew Polly.

My first encounter with Bruce Lee was at a video store in the early 90s.  My cousin and I rented The Big Boss, which at the time was mislabeled as Fist of Fury. After watching the film, we spent the rest of the night trying to punch and kick like Bruce. I eventually saw his other two (completed) Hong Kong films, and finally his magnum opus, Enter The Dragon.  When I heard about Matthew Polly's biography I couldn't wait to read it.

This book is exhaustively researched. Polly gives you a very complete picture of Bruce's life by interviewing almost everyone who worked with, was trained by, or new him.  The text of the book is 500 pages with 200 more of notes and sources.  Even though Bruce did not find fame in Hong Kong until 1971, his story of how he tried so hard to achieve fame is just as compelling.

Bruce's early years were spent reading comic books, child acting, becoming a cha-cha champion, and getting into street fights.  This was all before he was kicked out of school and forced by his father to move to the US to finish school. The book follows Bruce's journey in great detail.  From living in a closet at the Chinese restaurant, trying to a martial arts school, his first taste of fame playing Kato on The Green Lantern.

Bruce Lee's death has always been surrounded by mystery and Polly creates and accurate timeline of his last days and tries to come up with the most probably cause of his sudden death.  Bruce Lee died before the release of Enter The Dragon which went on to make him a world wide super star.  Polly also discusses Bruce's legacy and how his family has worked hard to keep it alive for all these years.

Overall, I thoroughly enjoyed this book, I read a lot of biographies, and this one is as good as they come.  An honest telling of his life without hero worship or character bashing.  Even though he died at 32, Bruce Lee lived an incredible life, one worth reading about.
Labels: Books