March 12, 2010
We are going to leave Kansas City and Marceline for now and visit some of Walt's Los Angeles homes.  I should probably start in chronological order but I'm not. 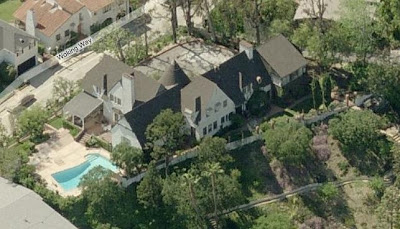 Diane Disney has even said that her and Sharon did not have any neighborhood friends while they lived in this house because it was on top of a hill.  Here's what you can se from the ground. Here is the long drive way I spoke of.  When I drove by a woman was actually walking up it towards the house.  I really wanted to ask her if she knew she was living in Walt Disney's house.  I decided not to be an annoying( or any more annoying) tourist and just take my pictures and leave. I have a few more pictures on my flickr site here.  Stay tuned because I have some even better photos of Walt's other LA homes.