June 15, 2010
Back when I was in the Walt Disney World College Program (2003-2004), one of my favorite things to do was explore backstage areas.  Most of the time it was the Magic Kingdom I was exploring.  Down in the utilidor (tunnels running under the Magic Kingdom) they still have a plate on the wall that indicates "This way to Mr. Toad and 20,000 Leagues." I used to have a picture of it but cannot seem to find it.

Well one day while exploring backstage I came across a custodial break room.  The entrance is very close to the restrooms that are connected to the Enchanted Grove: 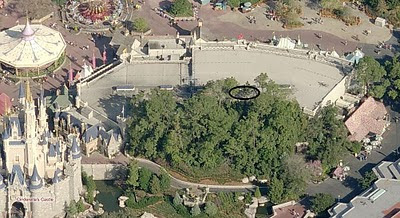 (Somewhere in that general area)

Through a small window on the door I could see Mr. Toad staring at me. I went inside and found another one! At the time I did not own a digital camera which should explain to you why these pictures are so off center.  I also took them very quickly because I did not know if I would get in some kind of trouble.

I've always wondered who decided they should put these two pictures in a tiny break room for custodians?  Well if you look back at the aerial map you will see that the break room is in the same building as The Many Adventures of Winnie The Pooh, the same building the housed Me. Toad's Wild Ride.