April 13, 2011
I found this photo in a stack of old pictures my Dad found when he worked at a retirement home. 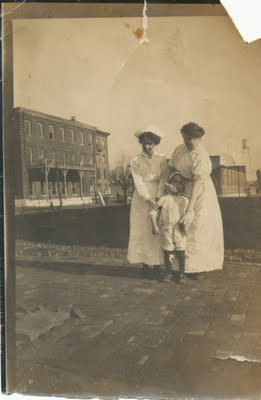 Here's what is written on the back. 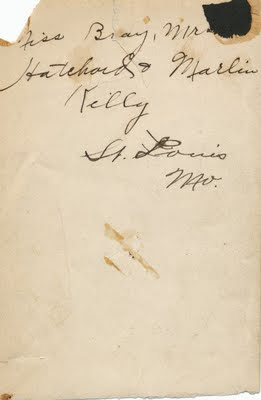 I looked at old St. Louis photos and I guessed it was the State Hospital.  Well I sent the picture to a St. Louis Historical Society and they actually researched it for me!

I did some research on your photos, and I think they are of the City Infirmary which was located at 5900 Arsenal Street. It was also called the City Isolation Hospital and U.S. General Hospital #40.  It was on the same street as the State Hospital (5300 Arsenal Street), so you were very close!

The architecture matches some photographs we have of the City Infirmary much more closely than that of the State Hospital. I also looked up the names of the nurses from the back of your photo in a 1914 City Directory and found a Bessie Bray listed as a nurse, an Alice Hachard listed as a housekeeper, and a Nellie Hatchard listed as an attendant all at the Infirmary.

Hope that answers your question. I enjoy solving these sorts of mysteries, so thanks for the challenge!