Tales From The College Program: My Role

May 24, 2011
Okay, in our last installment I told you about the College Program housing system.  Today I'm going to tell you about where I worked, but first a little bit more about housing.  I found this map of Vista Way while doing some scanning last night. 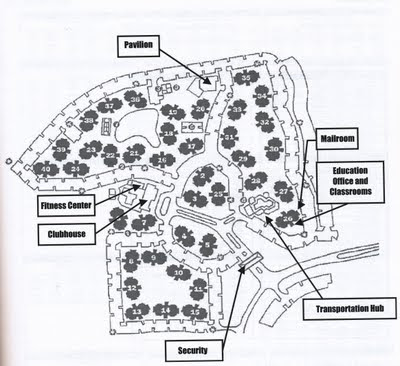 Vista Way has 40 apartment buildings, the only one not occupied by CP's in number 26, which is where you could take college courses (if you sign up for them, and if your school accepts them).  Each building has 12 apartments, 4 on each floor.  Each apartment has 6 CP's (except the 4 on third floor that only have 4). This comes out to 24 CP's on the first and second floors, and 16 on the third, making 64 per building.  Multiply that by the 39 apartment buildings and you have about 2,496 CP's living at Vista Way.  Remember, Disney has two other apartment complexes, so CP's make up a pretty good chunk Cast Members.

Anyway, back to our story.  Ralf and I had just selected our housing option, it was time to find our our roles (Disney's term for job).  Ralf went first, and was told he would be working Magic Kingdom ODF (Out Door Foods).  A pretty sweet gig, it's the Magic Kingdom!

I'm going to go out on a limb here and say that The Missing Link was the smallest restaurant on Walt Disney World property (it was torn down a few years ago).  Here's a PI map to show you exactly where it was. 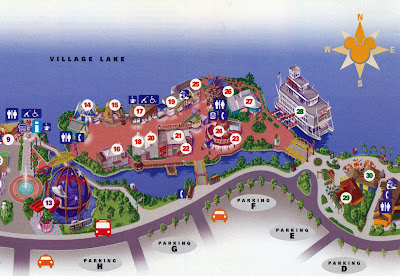 The Link is number 17 on this map, it was across from 8 Trax.  What's funny about this map is that the area they are claiming is The Missing Link is actually three places.  The Link was sandwiched between two gift shops.

Like I said before, the place was tiny.  Name me another WDW restaurant that is run by two people Monday through Thursday.  This meant that when one person went on break you'd end up doing everything yourself.  You would ring up the orders then walk down to the grill and cook it.

The Link was set up like a shoe box, on the far end from the door was the register, and the end closest to the door was the grill.  This could cause traffic jams late at night when the drunks would stumble in and not know where to go.  The Link also had what appeared to be (but wasn't) a walk up window.  Drunks would also stumble up to it, knock and try to order. 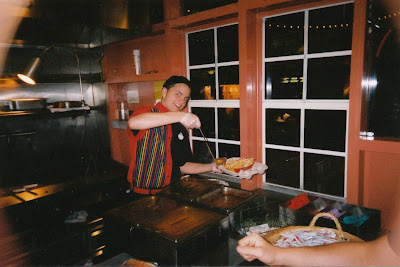 This is Dan at the grill, check out the costume we wore!

There were a lot of perks to working at The Link though, the first being it was rarely busy.  We would have a few rushes a night, but for the most part it was a pretty chill job.  The Link also did not open until 7 p.m.  This meant I did not have to go into work until 6.  I could sleep till noon and still have time to go to the Magic Kingdom before work.  Going in late also means getting home late.  We would usually be out by 1:30, but our hours were 6-2.  All of my roommates would be asleep when I got home and at work when I woke up.

The Link had 3 managers who also worked at Cirque Du Soleil, so a few times a month I would work at Cirque as a backer for the concession stand.  Obviously not the best roles on property, but definitely not the worst.  I know some of you might think "Who cares dude?"  I had to tell you these stories first to set up my CP back ground.  Believe me, I have some good College Program Tales coming.  So stay tuned for the next installment.