October 10, 2012
About six years ago I read Hollywood's Dark Prince, the most ridiculous of all Walt Disney biographies.  It's actually worth reading just for the outrageous claims Marc Eliot makes.  Just to give you an idea, the book says Flora was not Walt's mother, he was the illegitimate child of Elias and a mexican woman. Walt hid this whole life by hiring her as his house keeper.  One of the biggest "revelations" though is that Walt secretly worked for the FBI giving them names of communists in Hollywood.  The book has a few photos from pages of Walt's FBI file to back up the claim.  Well, after reading the book I decided to get a copy of his FBI file myself.

Thanks to the Freedom of Information Act (FOIA) getting a copy of a persons FBI file is pretty easy.  I made the request with FOIA and explained why I wanted to see the file.  About 3 months later they replied saying that my request was approved; all I needed to do was pay them $15.  Another 3 months went by, they confirmed that I had paid and about a month later I received a CD-R in the mail.  Inside a blank card board sleeve where someone had written Disney,Walt were 2 PDF files containing the 495 pages of Walt's FBI file.

The first PDF mainly discusses The Mickey Mouse Club wanting to tape a news reel segment in DC. The quality is pretty bad.  Most of the pages look like they were scanned, then photocopied and scanned again.  There are also a good number of pages that are completely blacked out, but I'm getting ahead of myself.


Here's one of the pages on the Mickey Mouse Club. 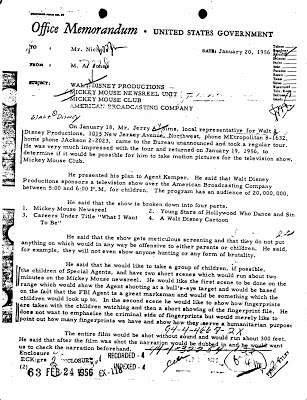 One film the FBI was very interested in was Moon Pilot.  There are dozens of pages of correspondence about this film and cut outs from multiple news paper reviews. 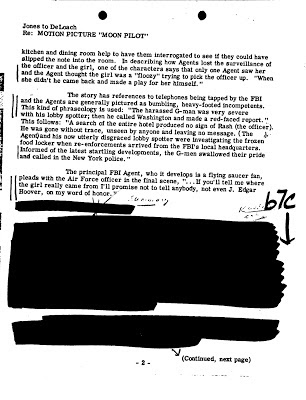 I wonder what was said here that they needed to black out.  Funny how after it mentions UFO's and J. Edgar Hoover we are not allowed to read anything else.

Here's one of the reviews: 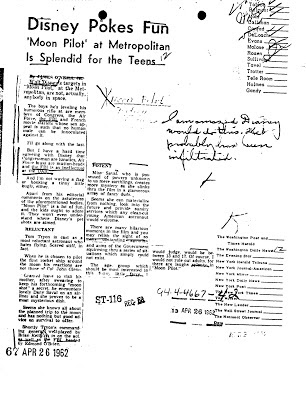 One of the "proofs" of Walt's involvement with the FBI in Hollywood's Dark Prince was this newspaper article: 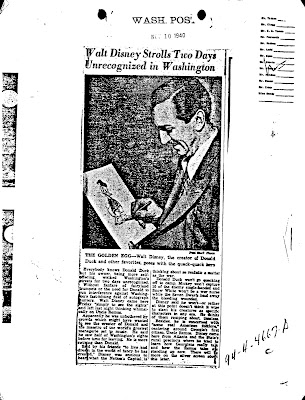 Since we are on the topic of film, I found this entry a bit odd: 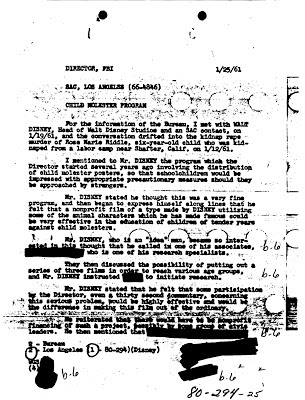 The above entry details a conversation Walt had with an agent where Walt volunteers to make educational films about avoiding strangers and things of that nature.  The way the agent describes it in the beginning though makes it sound like Walt had a real interest in a recent child murder.

There are also a few FBI memos discussing if the Bureau should accept Walt's invitation to the opening of Disneyland. 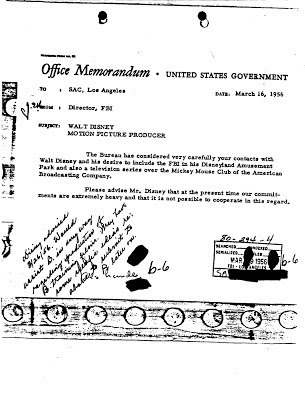 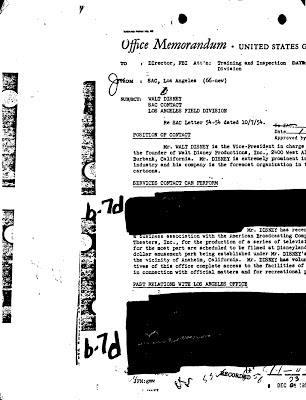 I do find it interesting that the FBI lists Walt as an SAC contact.  SAC standing for "Special Agent in Charge."   Did Hollywood's Dark Prince get something right?  Was Walt really an FBI informant?  In Part 2 we will look at Walt's correspondence with J. Edgar Hoover!