Tales From The College Program: The Christmas Parade (Part 1)

November 27, 2012
Since we are getting into the Holiday season, I suppose it's about time I talked about the Disney Christmas Parade.  When I was accepted into the College Program one of the things I was most excited abut was going to The Magic Kingdom on Christmas Day.  As a kid I always watched the Disney Christmas Parade and thought about how great it would be to see it live.  You can imagine my shock when the first week in December the CP Newsletter announced they needed extras for the parade taping.  That's when I realized....They don't actually film the parade of Christmas Day.

This was 2003 before the boom of social media, I didn't get my news from the internet, so there was really no reason for me to think the parade was filmed on any day but Christmas.  Anyway, back to the story.

The taping was done over 3 days.  The first was an early day when only Cast Members could sign up.  We met at the Magic Kingdom before the park opened and were taken to Exhibition Hall where they put us in groups and explained what was going to happen.  On our way in a manager stopped me and asked if I needed help.  It seemed strange to me since everyone walking in was a Cast Member, so I said "Oh, I just need to buy some film (because it was 2003 and people still used film)."  She looked confused "Oh....well, uh, we are having an event right now and..uh"  She saw me start to laugh and realized I was messing with her.  She jokingly said "I hope you don't end up in m group."  Naturally, I made sure I was.

Her name was Cathy, and she was one of the managers at the Emporium.  As she walked us to our spot on Main Street for the taping, I caught up with her and asked who we were going to see.  She pulled out a slip of paper and read off "Wayne Brady and Disney Channel Stars."  I asked "IS CHRISTY ROMANO GOING TO BE HERE?!"  She looked down her list, yes she was.  I told Cathy that I had to meet her.  She promised to do her best to help me and I took my spot on Main Street.


My roommates and I stood across from the Emporium, this was our view. 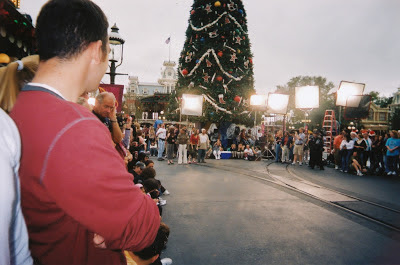 Things started to get underway.  The first float was Wayne Brady, he rode down Main Street singing "You'll be in my Heart" from Tarzan. 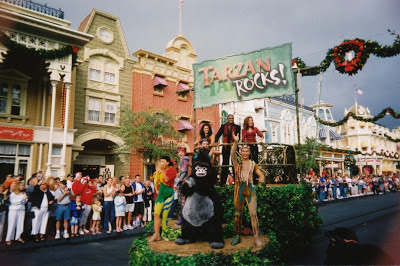 When he reached the end (or beginning) of Main Street the music and his float stopped.  Alright, I thought, who's next.  The float then reversed back to it's starting point and he started over.  If I had to guess I'd say that we heard Wayne Brady sing that 40 second clip 6 times.

He came over to our section to film some "We'll be right back" segments holding a baby that was in the crowd.  Then he left, time for the Disney Channel Stars.

The Disney Channel kids didn't have a float, they just walked down a short section of Main Street singing a song.  They consisted of the "That's So Raven" cast and Christy Carlson Romano (Star of Even Steven's and voice of Kim Possible."  They didn't take as long as Wayne Brady (which is probably why I don't remember what they sang).  They also filmed some promo shots across the street from us. 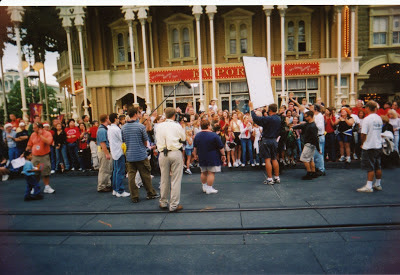 My roommate Dan had met Christy a few weeks prior to this, and he never let me forget it.  He even had a picture of the 2 together that he would taunt me with.  Here it is: 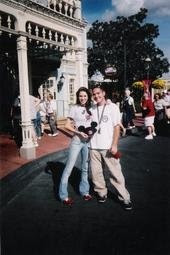 After they finished their taping, Christy and the other Disney Channel kids were hanging out in a roped off area by the Christmas tree.  I went over to Cathy and said "That's her!"  Cathy went over to Christy and said "There is a guy over here who would like to meet you." and what do you know, she came right over to me.

Before I tell you about this part though I need to explain a few things.  My coworker, Dan (a different Dan) and I had just bought these children's sized Disney Channel shirts.  I had Kim Possible and he had Lizzy Maguire.  We also thought it would be a good idea to get our hair cut at Walmart, this resulted in me having to shave my hair as short as possible to correct the atrocity.

So, Christy comes up to me, compliments my shirt and we take this amazing picture together. 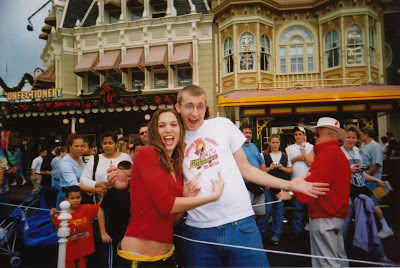 Do I need to point out how excited she looks in my picture compared to Dan's??

That was pretty much the end of day one.  I was going to write about all 3 days in this one post, but it's already pretty long so I'll save it for tomorrow.