Honey, I Shrunk The Kids

June 25, 2013
I remember being up early on a Saturday morning watching cartoons and seeing a trailer for a movie with Seymour from Little Shop of Horrors.  I ran upstairs and woke my mom up.  I told her there was this great movie coming out called Honey, I Shrunk the Kids and asked if we could see it.  Without any hesitation she said no.

I was really confused by her answer, until a few days later when I saw the trailer again and pointed it out to her.  Turns out she thought I had said Honey, I Shot the Kids.

After the movie was released my Saturday morning cartoons were interrupted by short segments about Disney's newest theme park, MGM Studios.  One of these segments showed the backlot tour and how the "bee scene" from Honey, I Shrunk the Kids was done.

In 1991 my family visited MGM Studios and while on the backlot tour my sister and I were picked to ride the bee from the film to show the rest of the tour how the effect was done.  A Cast Member came up and asked my parents if my sister and I wanted to be part of the show.  We said yes, obviously. They took us off the tour and onto a sound stage, and there it was, the bee!  Until we saw the bee we had no idea what we had volunteered for.  Having seen that special a few years earlier, I knew what we were going to do.  The rest of the tour caught up with us while Katie and I walked up a ladder and onto the bee.  From there fans were blown on us and we were told to act scared, but I remember just doing a lot of waving.  When it was over we were able to watch the video of us flying on the bee, then return back to the tour.


Does anyone know what happened to the bee? 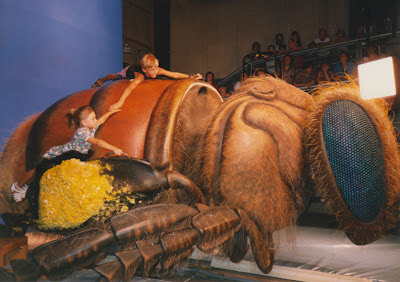