Tales From The College Program: Getting Fired. Part 1

September 21, 2014
All of my College Program posts up to this point have been in no sort of order, until now.  Today's post is written 10 years to the day, the day I was fired.

When you're a CP, working less than 40 hours a week is pretty much unheard of, but when you're a part time Cast Member, 40 hours a month is a miracle.  My program ended in January 2004, instead of going home I found an apartment a few miles away from Downtown Disney with my coworker Dan and his roommate, Rickli.  During the next program Dan and I worked a couple days a week.  It was almost no different than when we were CP's.  When that program ended in the summer our hours dropped drastically.  We were only working one or two days a month.  Instead of getting second jobs, we started doing medical experiments for money.  We'd spend a weekend at a facility in Gainesville and make a quick $1,000.  This is how we were able to afford our apartment.

My birthday (September 18th) came and I was finally scheduled to work.  There was a new CP at The Missing Link who was still in training, his name was Steve.  Steve was on the grill that night and he was having a hard time.  I was the middle man (I worked the fryer and made the drinks) so I would jump in and help him.  The Link was a pretty easy place to work.  It was the only quick service restaurant on Pleasure Island, but with so many other food options at Downtown Disney we stayed pretty dead most of the night.  Our big rushes would only last 15 minutes or so, but if you weren't organized at the grill you could get swamped fast.  That was Steve's problem, he could only make one order at a time and he had trouble organizing the tickets.

The next day I went to the Magic Kingdom with my pal, Matt Biddle.   My manager John called me later that night and asked if I could work on the 21st.  I hadn't worked 2 days in the same week in forever, I said yes.  The reason he needed me to work was because Steve had called in.  He had a class that let out at 5:00 which would cause him to miss the CP bus that would take him to work.  I had ridden that bus for the majority of my program, I knew that wasn't true.  The bus stop is literally 30 feet from the building where the classes are held.  My thinking was Steve had hated working at The Link and he wanted to get out of it for a day.

I went to Downtown Disney a little early on September 21st so I could buy Green Day's American Idiot album which had been released that day (This is the only reason I know the date of my firing).  It was Missy and I running The Link that night.  She took first break, and I had just started making myself some cheese sticks when Steve and his girlfriend walked in.  I said hello, but inside I was thinking "What are you doing here?  You called in, don't you know the first rule of calling in is don't show up at work later?"  He said they were Downtown for a movie and just wanted to stop in for a snack.  They ordered cheese sticks and a water.  I took the cheese sticks I was making for myself out of the fryer and gave them to Steve with a cup of water.  He offered to pay, but I told him "Don't worry about it, you're still in training, you eat for free."  Obviously, this was not  Disney policy, but The Missing Link was such a small place we always ate for free.  Even at the end of the night, instead of throwing away the leftovers we were allowed to eat what we wanted.  In fact, while I was a CP I usually didn't eat until I was at work.

Steve left and the night dragged on.  After we closed I was in the kitchen washing dishes, John came back from closing Cirque (Missing Link managers would manage Cirque and The Link, other nights just Cap'n Jacks).  I noticed that he had a Cirque kid with him.  This was odd because Cirque had been closed for a couple hours by this time.  John asked the kid to take over washing my dishes and asked me to come upstairs with him.  PI was kind of like Main Street, above The Link's second story facade were offices.  Above The Link was John's office and a small office for Loss Prevention.  As I was following John up the stairs, I jokingly asked "Am I in trouble?"  He didn't say anything.  Thats when I got nervous.  'Hey, John am I in trouble?"  He said "Let's just go to my office."

We sat down in his office and I was scanning my brain for anything I could have possibly done to get myself in trouble, I was coming up blank.  John sat back in his chair and let out a long sigh, "I have been dreading this all night."  Now I was really nervous, "What did I do?" I asked.  John replied "Did you give Steve free chicken fingers and a coke?"  It was at this point that I knew my Disney life was over.  "No" I told him.  John let out another sigh, this time of relief.  "I gave him water and cheese sticks."  John said "Well, someone saw you, and went over my head with it."  I asked John who it was but he wouldn't tell me.  It didn't matter, I knew exactly who it was...Rat Face.

As I stated earlier, Loss Prevention was also located above The Missing Link.  The guy who worked in that office looked like the health inspector from Ratatouille. (just. like. him.) 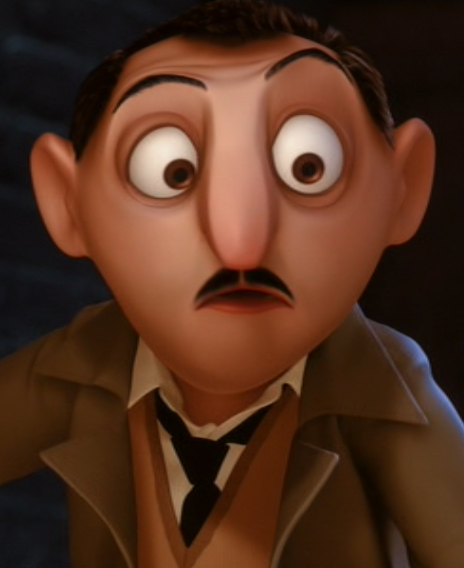 He always walked through The Link when going out to PII, instead of the back of the building where he would get a nice view of the Saratoga Springs construction. (This is always the best place to be at 12:00 New Years Eve because you can see the fire works from all over WDW at once)  Missy would always say hello to him, and he would always ignore her.  This really annoyed her, so one day she said something to John about it.  John talked to Rat Face about it and he started giving Missy a very forced hello whenever he walked through.  I knew he was the one who ratted me out.  He did not tell John, he didn't even tell John's boss, he went as high as he possibly could.  I mean, why wouldn't he, this was a matter of $3.25!  Sure, you could say "Well, he was just doing his job."  but he could have  easily told John.  HIs office literally 6 feet away, this was revenge for the scolding.

I asked John what would happen to Steve, he said that he would be fired too for accepting the food.  I had to write down what happened and made sure to include that Steve had tried to pay more than once to help his case.  Then the worst part came, John asked for my employee ID.  This was also my park pass.  In just  a matter of seconds I lost every reason I had to be living in Florida, it was awful.  John felt bad, I made him call Dan and tell him what he had done to me, which he did.

There was nothing left to do after that but go home.  I got up and walked towards the door.  Before I walked out I stopped and turned back, "Hey John."  He looked up from his desk "Yes?"  I told him "If it was gonna be anyone, I'm glad it was you." John's response was "You're going to make me cry."

Don't tell him, but I stole that line from Al Pacino in "Donnie Brasco." (watch the scene here)

There you have it, the day I was fired.  Since this post was long, I'm going to write a part 2 next week where you'll learn about how I tried to get my job back and the scam I used to keep going to the parks.